In honor of my favorite time of year, the “season” in New Orleans running from Mardi Gras to Jazz Fest, I can’t help but write about this most unique of cities. Below is my ode to the Bywater. For more, check out my latest on Paste: 11 Insider Mardi Gras Tips. 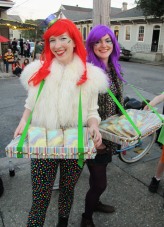 Basking in the Bywater Glow

As we approached the corner bar, my companions, long-time New Orleans residents, proclaimed Markey’s to be the best dive in town. As we all know, when you’re talking about the Big Easy, that’s saying a lot. It had all the hallmarks of a classic dive: regular folks’ beer, i.e. not just fancy-dancy craft brews; colorful locals a plenty, and the added bonus of shuffleboard tables. But I’ll admit I didn’t feel the love during my first visit to the Bywater.The neighborhood seemed downtrodden; the streets were empty; and the place felt far from alive, even for a dive.

That was seven years ago. Since that time I’ve found myself back in the neighborhood more frequently with each visit to the city, sometimes even to Markey’s, and marveled at its remarkable and highly-artistic evolution. These days there’s always something new to discover in the Bywater from graffiti art installations and pop-up galleries to ink-worthy new restaurants and engaging public green spaces.To say the area is having a moment is certainly an understatement at this point.

Don’t get me wrong: it still wears its grit with great glory – this is New Orleans, after all – but the energy and heart on display in today’s Bywater is palpable, making it well worth a trip to explore the neighborhood and bask in its creative glow.

Shining a Light on the Bywater

Located just over two miles downriver from the French Quarter in one of the city’s oldest neighborhoods, Bywater seems a world away. The tree-lined streets are filled with 19th century homes reflecting the area’s exotic mix of Creole, French, and Spanish styles and its riverfront is populated with warehouses, many of which are being repurposed, representing its more recent industrial past.

You’ll often hear comparisons to Williamsburg in Brooklyn; but I can’t help but think of a place closer to home. What’s happening today in the Bywater reminds me of the transformation taking place in my hometown Birmingham’s Avondale neighborhood. Just like in our own historic, yet long-ignored enclave, Bywater’s renaissance has been led by artists and young creatives in search of more affordable housing, business opportunities, and meaningful community engagement. This influx of the new bohemian into one of the city’s traditional blue collar communities is resulting in a renewed focus on what it means to be a neighborhood with all the reverie and spirit of New Orleans, but with more freedom and room to be itself than its tourist-attracting neighbors in the Quarter, and increasingly the Marigny.

The “G” word comes up often these days and while I can’t pretend to be smart enough to tackle whether gentrification is ultimately good or bad, I do know that change is inevitable. And, when you see change taking place in a city like New Orleans or Birmingham in a way that seems to be creating opportunity for everyone and inspiring a new spirit of community, I think it’s worth shining a light on.

Almost two years ago, in a signal of what was to come for the neighborhood, acclaimed chef Ian Schnoebelen and business partner Laurie Casebonne (both former Birmingham residents,) opened their second New Orleans restaurant, Mariza, near the riverfront in a former rice mill. Named as one of the best restaurants in 2013 by Esquire magazine, Mariza’s Italian-inspired cuisine and welcoming vibe have brought people from all over the city to the Bywater – many for the first time.

“We had been living in the Bywater for several years renovating what’s known as a ‘double’ and really found ourselves engaged by what was happening here in a way we hadn’t experience before,” Laurie said while sitting in the newly finished, open living room of the (double) shotgun home she and Ian own. This new level of creativity and community spirit factored into their decision to open a business here instead of in the French Quarter, home to their first restaurant, Iris (which they closed earlier this year to focus solely on Mariza.) Ian summed up the decision saying, “We like feeding people good food and we believe in this neighborhood. So it just made sense for us to start a business here.” He also mentioned a sentiment that I heard over and again during my time in the Bywater, “And, there’s parking here.”

Mariza’s location is what you might call a Bywater hot spot. NOCCA, the New Orleans Center for Creative Arts, also calls it home. The acclaimed center, whose alumni include Wynton and Branford Marsalis and Harry Connick, Jr., presents performances that draw audiences from around the city and its culinary arts program – which graduates the first class this spring – is garnering world-wide attention.

Just a block down, you’ll find the workshop and gallery of prolific artist Dr. Bob. To the delight of some and annoyance of others, his “Be Nice or Leave” artworks have become a symbol of the city. Whether or not you’re inspired by his bottlecap-framed work, it’s interesting to stop in and see what’s on display.

Continue down the street and you’ll come to the Crescent City Park. The newly opened green space has transformed a 1.4 mile stretch of the industrial riverfront in much the same way that Birmingham’s Railroad Park has transformed Midtown. When I was there, it was filled with school kids on a field trip learning about the native plantings and the river that impacts so much of their lives.

Across the street from the park’s Piety Street Arch entrance, you could while away an afternoon sorting through the vinyl at the new location of Euclid Records, enjoying a slice and local brew at Pizza Delicious, and indulging in a sweet treat at Piety Street Sno-ball – all in the same tiny block.

Ample street parking and relatively little traffic make it an easy neighborhood to explore by car but the locals will love you more if you rent a bike and leave the coveted street parking to them.

STAY:
For those interested in a total Bywater immersion, there are a few quiet B&B’s including the aptly named Bywater Bed & Breakfast. Most visitors to the neighborhood take advantage of the plethora of affordable Airbnb’s for rent in the area’s historic homes.

Of course, there’s nothing wrong with straddling two worlds with a stay in the French Quarter at a classic hotel like the Monteleone so you can visit your beloved favorite spots in the Quarter while making frequent excursions to the Bywater – it is just two miles away after all.

Dancing Grounds Studio
With a mission to help build and connect the community through dance, the new studio presents a weekly roster of affordable classes like Hip Hop Salsa, Body Werk, and Bounce Fitness.

Bon Castor
This boutique’s focus is all local, from art and jewelry to cards and clothing.

Bywater Bike Tour
Confederacy of Cruisers offers a great way to see Bywater and beyond and learn some history – all while getting a little exercise (not a bad idea before exploring the suggestions below).

EAT & DRINK:
Mariza
The perfect balance of welcoming neighborhood feel and divine cuisine. The potato gnocchi with roasted peppers and whole fish seasoned with a lemon vinaigrette and served with fennel salad shouldn’t be missed.

Booty’s Street Food
I love this spot highlighting street food from around the world. The menu changes often but a sampling might include “Gunmandu” (potstickers) from S. Korea and “Papanas” (spiced donut holes) from Romania. It’s known for “Teachers Take Twosdays” where educators line the bar for 2 for 1 tacos, house wine, and beer. Now that’s what I call supporting schools!

Bacchanal Wine
If you’re in the mood for enjoying wine and cheese while listening to great live music in a beautiful twinkle-lighted courtyard – and who isn’t? – this wine shop/restaurant is the place to be.

Satsuma Café
This hipster coffee shop and café, a neighborhood favorite since opening in 2009, serves up inventive soups, sandwiches, and juices from locally sourced ingredients.

Maurpeas
A great place to mix old school simplicity with a classic dish like Creole Shrimp & Grits and new school mixology with a concoction like Grandpa’s Medicine (gin, spiced syrup, and a splash of strong brewed coffee.)

Elizabeth’s
Famous for its praline bacon and house-made bloody marys, Elizabeth’s is a Bywater institution.  The wait can be notoriously long for brunch so head to the upstairs bar, order one of the famous libations, and enjoy the classic ambiance.

Pizza Delicious
It seems like every conversation in the Bywater begins and ends with Pizza Delicious.  One taste of the thin crust pies topped with the freshest ingredients and you’ll understand all the love.

Piety Street Sno-balls
Whenever you find yourself overheated in the Bywater, which is often, head to this cool spot for inventive flavors like Café Con Leche and Kaffir Limeade.

Vaughan’s Lounge
This may be the Bywater’s most famous establishment thanks to the infectious spirit of the artist most often associated with it, Kermit Ruffins, as well as HBO’s Treme.  Although Ruffins has officially retired, his long-time band the Barbecue Swingers still gets every body in the house moving on Thursday nights. 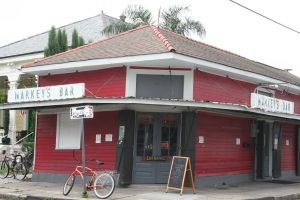 Markey’s
A dive indeed, and a great place to lose track of time while mixing it up with locals of all ages and backgrounds.

One thought on “Basking in the Bywater Glow – New Orleans, Louisiana”

Wooeeee, how we love the layers. Right?. #hello #lucca #anew
Golden hour. #lucca
Today (every day, really), I throw kisses into the air hoping the wind will take them across the sea to land softly on the cheek of this beautiful lady, my mom. Wishing you a very happy Mother’s Day Margo Lewis! 🌸🌸🌸
How can I help but throwback to this fabulous party in NYC a few years ago. “P.C.” - you know this one: pre-covid. But also, “P.R.” - meaning pre-renovation. A throwback, thanks to google photo of the day, to a long ago time when I put on clean clothes and makeup and went to fabulous parties with fabulous friends - including this one with special guest Matt Damon! 😂😂😂 Right now, as I am covered in dust and honestly cannot remember whether or not I brushed my teeth this morning, well, that seems like a different life, truly. Tell me this…WHY o why did we choose to take on another renovation project? 🤪🤪🤪 #crazyinlucca
This team! 💪 questa squadra! Renovations are not for the faint of heart, but thankfully we have these pros on our team. We really do enjoy this process (Because. We. Crazy). 🤪. #grateful #renovatinglucca #weloverenovationprojects #househuntersinternational
It’s a blue-sky-birthday kinda day. #grateful
“I didn’t realize it was a ‘concrete mixer in your living room’ scale renovation,” said a friend who stopped by yesterday to check our progress. And, I laughed. And, laughed. Concrete mixer in the lounge is hardly the half of it. So many renovation stories and pics to come. (Because…we are crazy)! 🤪
Lucca is putting on quite the spring show! 🌸 #santazita #flowerfestival #primavera2022 #luccaitaly🇮🇹