Almost 46 years after the dream began, a massive art installation by world-renowned artistic team Christo and Jeanne-Claude comes to life in Northern Italy, giving over half a million visitors the surreal experience of walking on water.

“The Floating Piers,” an installation of grand proportions imagined by acclaimed artists Christo and Jeanne-Claude, became a reality last weekend, existing for only 16 days, (June 18 – July 3.) With exception of times when sections are closed for needed maintenance, the work is accessible 24 hours a day, that’s a mere 384 hours in total. Walking the piers is completely free to the public, (a hallmark of the duo’s impressive catalog of public works.)

Before delving into the details and sheer audacity of the project, let’s look at the road to its realization.

Fulfilling the artistic vision has been a long, sometimes bumpy path. 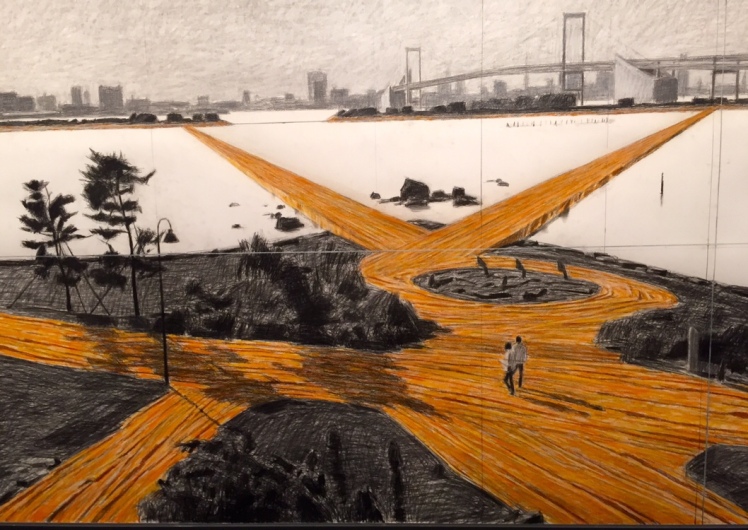 Win Some, Lose Some

Those planning to make the excursion to Northern Italy for the installation’s last seven days of existence, should begin the journey in Brescia, where from April 7 – September 18, Santa Giulia Museum hosts “Christo and Jeanne-Claude Water Projects,” an exhibit tracing the team’s immense body of work, with an emphasis on water-related projects, some successful, others not, leading to this installation.

After meeting in Paris in 1958, the duo began formulating ideas for public installations involving wrapping or “packaging,” large objects. “Docked Packages,” a work using tarpaulins to cover large rolls of industrial paper on the harbor in Cologne in 1961 was their first noteworthy installation.

Around 1964, “packaging,” on an extreme scale became the focus. CJC set their sights on a skyscraper, as a way of asking passersby to look at imposing structures around them differently. Naturally, New York City was the desired backdrop. These sketches below represent as far as the project made it down the pipeline. After many attempts, the artists were unable to secure permissions needed and the project was abandoned (but certainly not forgotten.) Although, obviously, not a “water project,” it’s an important development in the team’s evolution that would push them into exploration in the realms of air and water.

More determined than ever to tackle large scale installations, the team blazed through the sixties with a successful array of installations wrapping everything from buildings and monuments to stretches of coast. Packaging highlights included wrapping a historic fountain and tower in Spoleto, Italy, and dramatically encasing the Museum of Contemporary Art in Chicago. 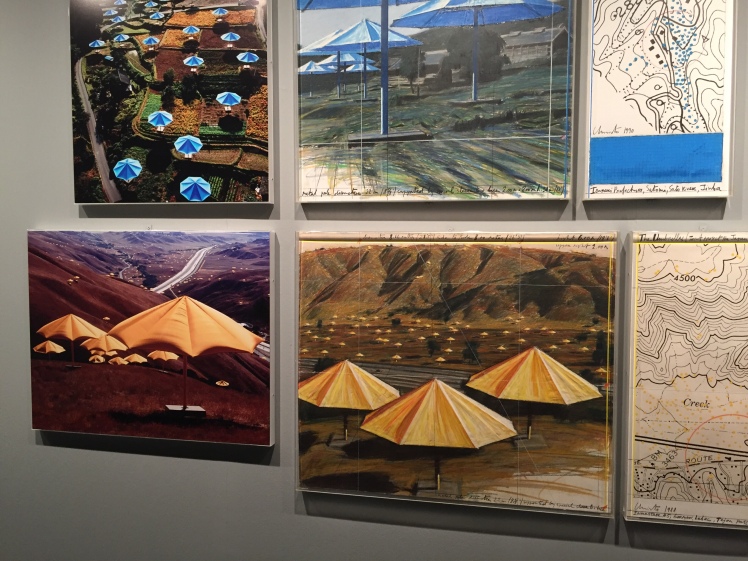 In 1970, CJC announced plans for a daring new foray, using fabric to create walkways, on water. The work was called “Inflated Pier,” and was designed with Rio de la Plata, Argentina in mind. Even with curators and arts execs on their side, permissions proved illusive. One rudimentary sketch is all that remains of that project; however, seeds were planted that would eventually blossom (sort of.)

Fast forward to Tokyo Bay in 1996. The team took the ideas developed for Argentina a quarter century earlier and expanded the vision. Technology that could make floating walkways possible had progressed, allowing for a more ambitious plan. Below is a sketch from the “Daiba Project” for Japan’s Odaiba Park. This dream was never to be realized, due once again to the inability to secure necessary permits and permissions.

Success, In and Out of Water

To fully appreciate the scale and context of “The Floating Piers,” it’s helpful to see a few projects that were realized along the way, with great success and fanfare. Here are a few of the most contemporary:

“The Pont Neuf Wrapped” – Paris, 1975-1985.
A project ten years in the works, the wrapping of Pont Neuf signaled a victory. Getting permission to transform one of the world’s most iconic structures was no easy feat and the result was as impressive as the effort. Silky fabric covered even the curbs and lampposts, seemingly transforming the bridge into a breathing entity, morphing with changing light through day and night.

“Wrapped Reichstag,” – Berlin, Germany, 1971 – 1995.
Man, was this project a long time in the works, 24 years. Eventually CJC’s stubbornness prevailed, and Berlin’s most famous symbol of democracy transformed into a living entity, shimmering in silver.

“The Gates” – Central Park, NYC. 1979 – 2005.
Another case where persistence eventually prevailed. In 2005, in the team’s last public installation prior to “The Floating Piers,” (and the death of Jeanne-Claude,) the joy of strolling through the tree-lined paths of Central Park was kicked up a notch. 7500+ gates with flowing saffron fabric provided a whimsical canopy for everyone to enjoy. It was said by those who saw the installation from above that it appeared as a golden river. For those of us who strolled within the canopies, it felt like being swaddled in a glowing cocoon. Or maybe that was just me. 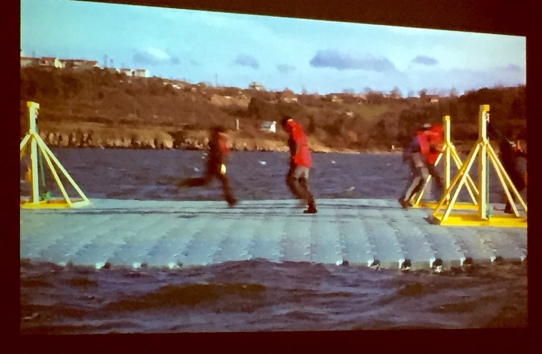 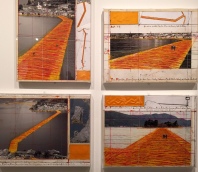 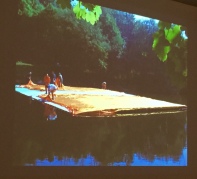 In the life and work of any artist, studying the struggles as well as successes over the body of work offers insight into the individual components of each new project. It’s with that spirit I share this post and urge visitors to immerse fully in “The Floating Piers,” by appreciating the works that came before and embracing the beautiful whole.

On paper, this might seem the shortest gestation ever for a CJC project. Hopefully, the above overview puts that notion to rest.

Once Lake Iseo was chosen as the ideal location due to the calmness of the water, position of two islands within the lake, sight lines and dramatic vistas available from the surrounding mountains, the permissions in this case – thankfully – came relatively quickly. Italy, it seems, was as eager to welcome Christo back as the artist was to work here (it’s been 40 years since Italy hosted a CJC installation.) 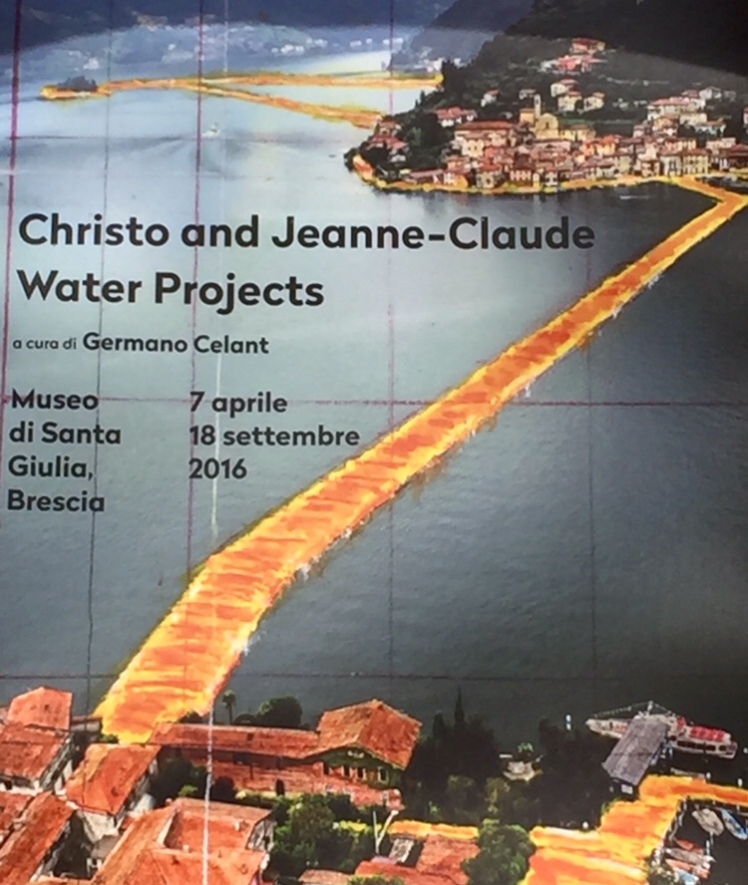 High tech design – including a modular floating dock system composed of 220,000 high-density polyethylene cubes – meets a hellavu lot of sweat, (just imagine sewing and installing over 100,000 square meters of fabric,) involving a team of over 500 workers, lead by the artist vision of Christo and legacy of Jeanne-Claude. It’s an epic feat that deserves the world’s attention. And, if visitor turnout, which has exceeded expectations and capacity thus far, is an indication, it seems the world is paying attention. 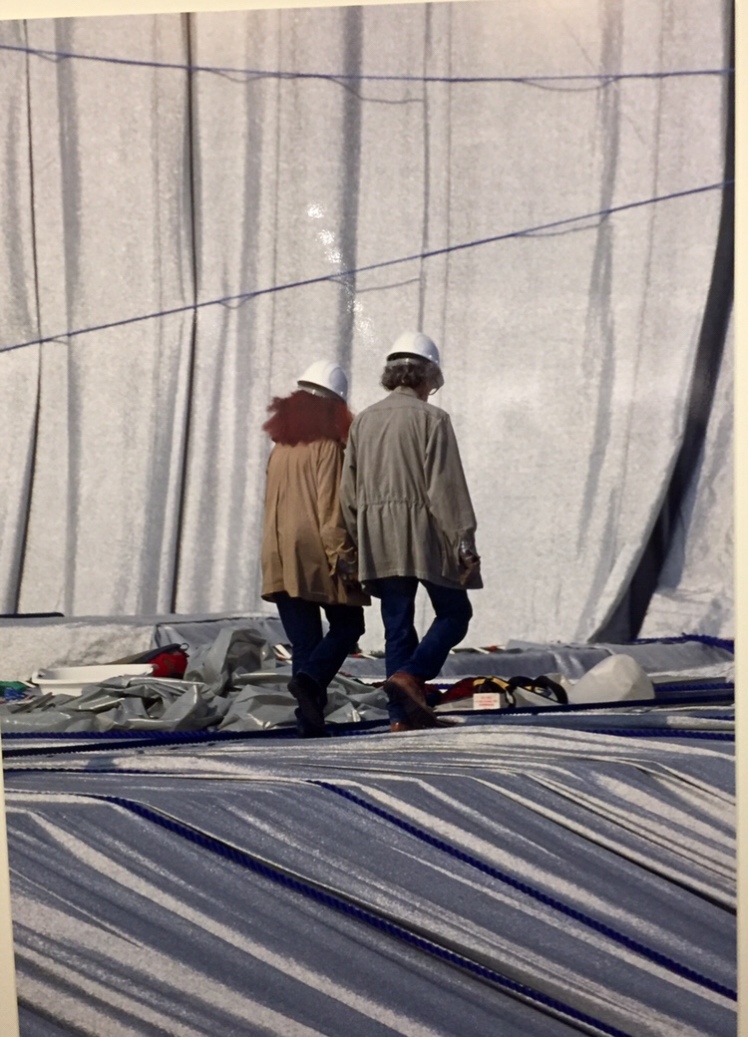 Experience “The Floating Piers,” before they disappear.

Read here for an overview of the installation in action as well as tips for visiting this week.

And, I can think of no better way to wrap up this article than with this shot of the artists doing what they love, examining and discussing a project in action.