Week One
It seems that most Americans, us included until now, have never heard of Sintra or Cascais. Of course, we all know about Lisbon but I wonder does our knowledge even come close to touching all it has to offer. (Hardly, me thinks.)

And, why is that? Why is it that every travel feature we read or see covers yet another angle of the European superstars – Paris, Rome, and Madrid (all ink-worthy, of course) but generally turns a lazy eye to gems like Valencia, Lucca, and Toulouse? Or in this case what I’ll refer to as the Portuguese Trifecta: Lisbon, Sintra, and Cascais.

Our first stop on this 5-week adventure spanning Portugal, Spain, and Italy is the gloriously unique and beautiful Lisbon. A city that is so walkable you really don’t have to figure out public transportation but will want to take a ride on the historic Tram 28 just because it’s so romantic.

Lisbon is an easy direct flight from Charlotte, NC, and it is often one of the cheapest flights into Europe.

We came here two years ago during a layover to Istanbul because TAP Portugal offered cheap flights if you spent at least 24 hours in Lisbon. This tourist-enticing trick worked beautifully – we were immediately wowed and knew we would return soon.

And, so here we are with Lisbon as the starting point for this primarily unplanned and by-the-seat- (of our synthetic wrinkle free traveling) pants trip. The one thing we do have planned is to end the trip in Lisbon before flying back home. So there’s much more to come about this friendly and accesible, yet remarkedly exotic, city by the sea.

Less than an hour train ride from Rossio Station in Lisbon, we found ourselves in Sintra. A city so important historically and culturally it boasts almost a half dozen castles, great manor houses, and significant ruins. We also found it crawling with day-tripping tourists who come in just in time to hop on a castle-circuiting bus, race through the sites, buy a few modern-day azulejos, and head back to Lisbon.

If time and/or mobility is a concern and you must go this route, then it’s definitely worth it. But if you can devote a few days to exploring Sintra by foot or bike, the rewards of getting to each site will surely be greater. They were for us. From a steep hike to the hilltop Moorish ruins and through the whimsical municipal park trails to the amazingly eccentric grottos and wishing wells of Regaleira, Sintra is a special place. As an expat we met who has been living in Sintra for a decade said, the place has magical powers. It’s what lead Moneybags Monteiro, the coffee tycoon, to spend his fortune creating a fantasy palace in the hills, what inspired father and son duo of Anjos Teixeira to sculpt such playful forms, and what compelled a long line of writers to spend years in Sintra crafting stories. We spent three days basking in the magic then decided it was time to move on…but not far.

To complete the triangle, I took a 20- minute bus ride – #403 through Cabo da Roca, the Westernmost point of contiential Europe – from Sintra to the seaside city of Cascais (pronounced “kush-kaish.”). My husband rented a bike and tackled the switchbacks and hills to meet me there.

It’s often referred to as a fishing village, but any thoughts of village life here are long ago past. It’s an unexpectedly sprawling city but features a compact, charming historic center that rests along the Atlantic. You can walk or bike for miles along the coastline reaching sandy town beaches and breathtaking vistas. For a great outing, rent a bike, run, or walk the 4.23 miles to Praia do Guincho beach. It’s a surfing hotspot so you can expect a constant breeze but it’s still filled with sunseekers and local families – although not nearly as packed as the beaches closer to Cascais. For the patient, there’s a easy and cheap bus that picks up right in front of the beach and takes you back to Cascais.

We are now almost a week into this trip and have barely moved on the map. What can I say, we love the slow-crawl.

Next stop…still a little unsure. We are going North that we know, so stay tuned.

SEE
Lisbon – This city aglow has so many attractions it almost makes me blush. I’ll devote a future post to everything Lisboa.

Sintra – There are a diverse array of fantastic sights and museums in Sintra – all quirky and over the top – including the Nacional Palace Pena, but the star attractions for us were:

Castelo dos Mouros, Sintra – it’s a 45 minute hike straight up to exquisute Moorish ruins. The views are spectacular and the scope and scale inspiring.

Quinta da Regaleira, Sintra – dreamed and financed by a Brazilan coffee tycoon and designed and built by an Italian opera set-designer, Regaleira is as fanastically weird and surprising as you can imagine. You could spend days exploring the caves, grottos, wells, and paths that make up the meticiously designed grounds.

Cascias – Praia do Guincho, 4mi from Cascais, it’s a great beach for surfing or just watching others surf and for soaking up the sun. There’s a small cafe with sandwiches and drinks and a few (just a few) hotels with restaurants nearby.

STAY
The House, Lisbon – we spent just one night in The House a few years back. With an expansive patio boasting what has to be Lisbon’s best view plus an honor bar and cosy rooms, we knew we would return and soon we will.

Almaa Hostel, Sintra – is located a 15-20 minute walk from the train station and outside of the main tourist drag. The location was such a plus for us. It’s in a residential area, has serene gardens, hiking paths, yoga classes, and a beautiful communal kitchen and outdoor dining space. Plus, there’s a medieval themed tavern next door which is nothing if not eccentric and with magical powers all it’s own. Another plus, the hostel is right down the street from Regaliera. Need more? The hosts invited us to join them for lunch one day where we met tons of locals and for a brief moment felt like part of the fabric. http://www.almaasintrahostel.com

Nice Way Cascais – is located in the city’s charming old quarter, just a few blocks from the sea. This place is equally hip and laidback. A true surfers’ haven. We weren’t the oldest travellers there, but it was close. Still it’s a great place with a cool vibe. Just don’t expect much sleep.

Agarre o Momento, Cascais – For a good nights’ sleep and interaction with a lovely host, this home in a neighborhood about 1 km out of the center is a great choice. The backyard garden is a peaceful retreat, communal kitchen is great for cooking a meal, and Christiana and Mr. Browning (her cat) make for great company.
http://www.agarreomomento.com

EAT
Tasca do Xico, Sintra – normally we avoid any place in the main tourist hub and look for spots off the beaten path but in this case we were looking for a spot to watch the world cup (Portugal vs Ghana) and stopped here as all the staff were gathered around the tv set in the corner. We ordered a vinho verde and joined the cheering. Fast frienships were formed leading us to several long and entertaining dinners spent practically in the kitchen with the staff. The small plates are divine…especially bacalhau with chick peas.

Taverna dos Travadores, Sintra –
I have to admit, we entered this taverna in a place of desperation. We had just spent 2+ hours at an annual carnival in the parque next door attempting to get a meal. We waited in line over an hour at a makeshift restaurant (seriously.). Once we joined the throngs of people seated the story doesnt get any better. An hour+ in we had received vinho verde (good!) but still no food (bad!), while those around us enjoyed their orders of grilled sardines yet we were by-passed (very bad!) Finally, giving up, we stumbled into Taverna dos Travadores hungry and surely exuding bad energy. They met us with smiles and kindness. Soon our table was filled with vinho carafes, platters of fresh, delicious fish and local cheeses, and a heaping helping of the world’s best octopus casserole. Sometimes things just work out the way they should.

Saudade, Sintra – A great little coffee and tea shop with delicious quiches, soups, and salads. The owners appreciate and showcase local artisans and the entire vibe is welcoming.

Jardim Dos Frangos, Cascias – yes, this literally translates to “garden of chickens” so you can imagine my husband’s surprise when I, a longtime pescatarian, texted him that we should meet here after his bike ride and my run. Don’t let the name fool you, I had one of the best omelettes ever and Matt, well…he devored that chicken. 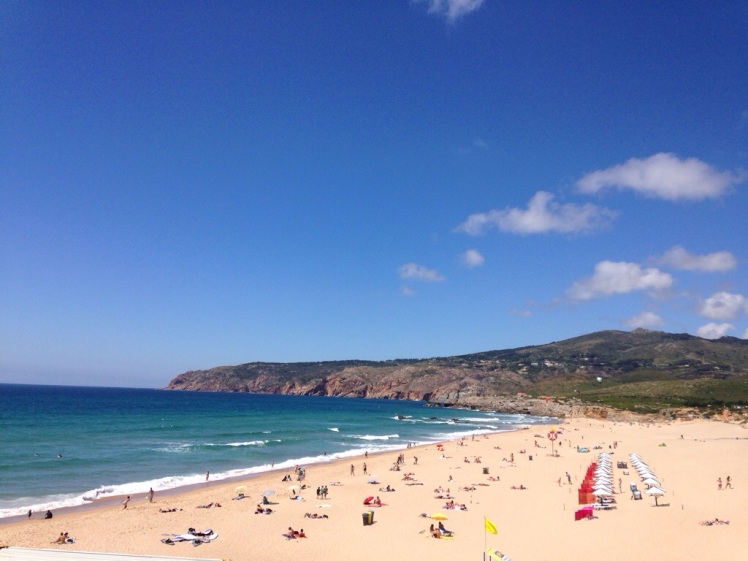 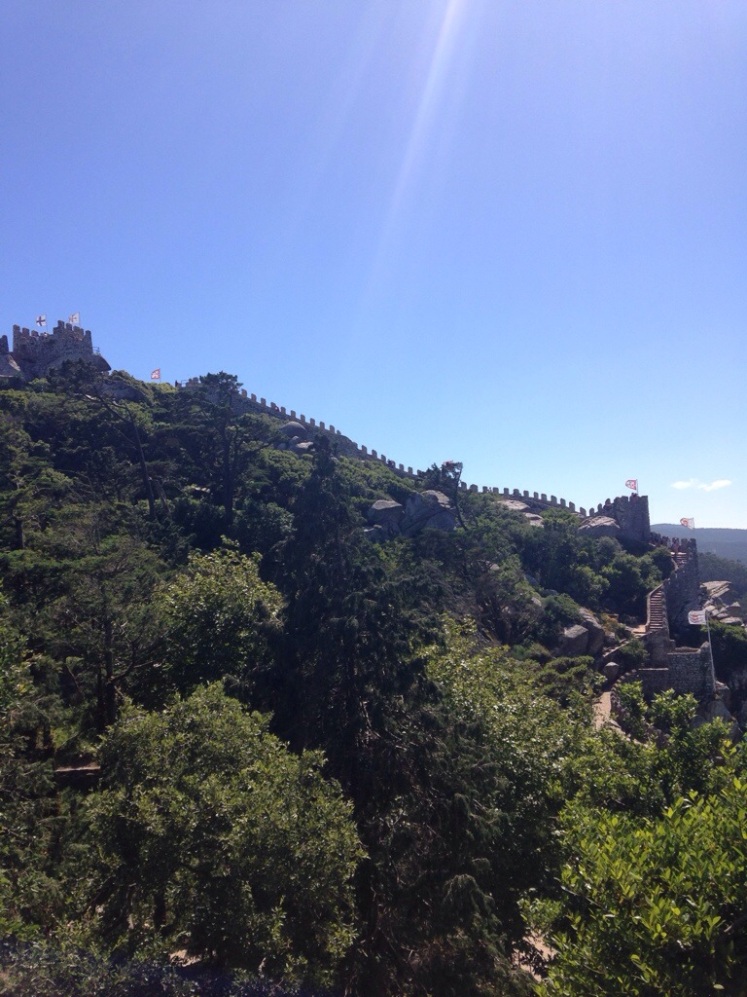 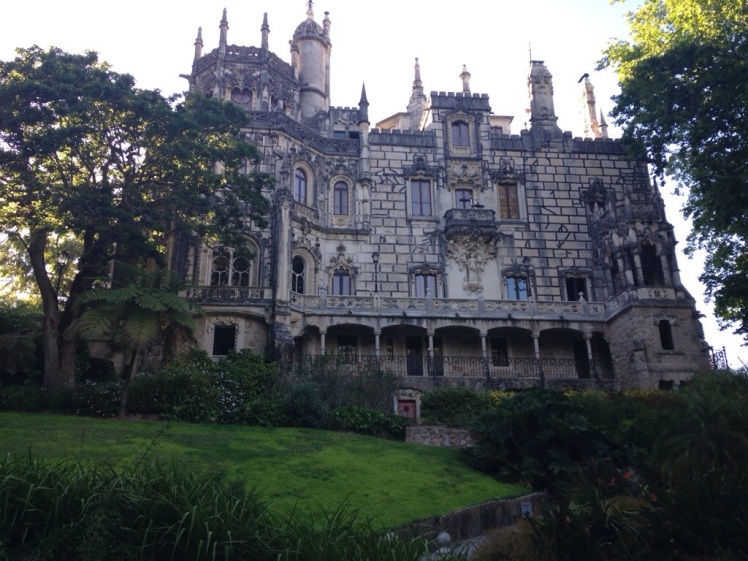