Since being named as 2019 European Capital of Culture by the EU Commission, (along with Matera in southern Italy,) Bulgaria’s most famously historic city is undergoing a mighty-scale spruce-up. An optimistic mood, coupled with renovation and re-invention projects, make this a great time for visitors to experience Plovdiv.

Here’s what you should know: 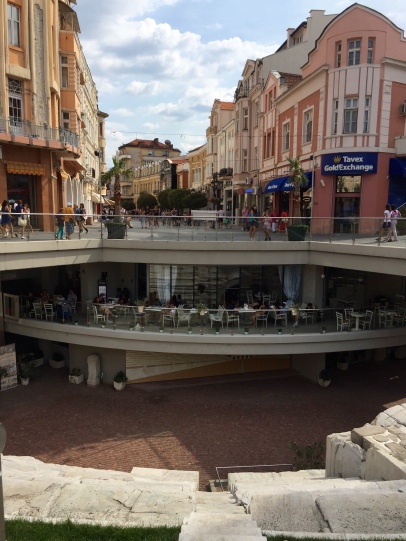 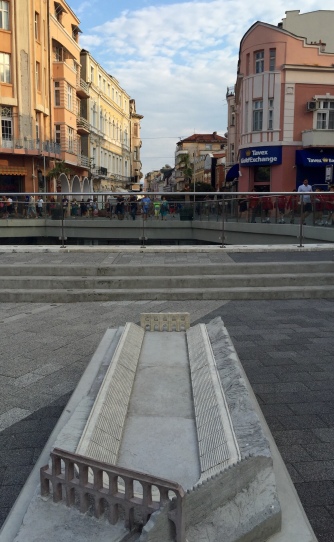 Ancient Theatre in the center of Plovdiv, Bulgaria

The city is in ruins.
Today’s citizens of Plovdiv live, eat, drink, and love amidst ruins. Thracian. Roman. Byzantine. There’s a ruin for every empire worth it’s gold leaf.

It’s no wonder. The Thracians settled here around 5000 BC making Plovdiv one of Europe’s oldest continually inhabited cities. Since then, every powerful hand in the region has left a mark; from Romans to Ottomans.

A walk along the main pedestrian artery, Tsar Boris, surrounded by grand fountains and temples of commerce (i.e. shoe and dress shops,) becomes disorienting when you stumble upon an exposed section of subterranean marvel. The Ancient Stadium of Philippopolis was discovered in 1923 during a construction project. Estimated to be nearly 800 feet in length, and to have once housed 30,000 spectators, the giant continues to rest underneath the modern city, while the viewing platform provides a small glimpse into an ancient empire’s staggering glory. 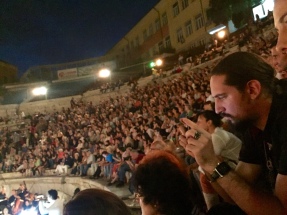 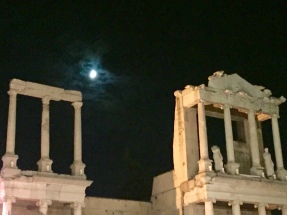 Boasting even more pow-factor is the city’s Roman Amphitheatre, nestled among the cobblestone streets of the 19th century Old Town. Whatever you do while in Plovdiv, if there’s an opera at the amphitheater, be there. Great views, time travel magic, unforgettable experience.

Plovdiv does sculpture. The quirkier, the better.
It might seem an intimidating task to compete with those industrious Romans when it comes to public eye candy, but a long line of artists gracing Plovdiv’s streets through history have jumped to the challenge.

Don’t miss – actually, you can’t miss – the 36-foot concrete Soviet soldier known as Alyosha topping Bunarzhik Hill, one of six hills surrounding the city. It’s intimidating and awe-inspiring, at the same time. Also, check out the mesmerizing water and metal sculpture in the main square beside Tsar Simeon Garden. One of my personal favorites.

Lovers of quirk (us!) should go in search of Milio. (Hunting tip: Start near the central ticket kiosk and you’re warm.) Milio was not a war hero or politician. He was just a regular joe. A guy known for sitting in the exact spot. Every day. Watching the world go by. Always with a smile and kind word. The citizens of Plovdiv loved Milio’s warm deamonor so much that they created a statue in his honor. It’s thought if you sit beside the bronze Milio today and whisper a wish in his ear, you wish will come true. And, it’s worth a try!

All roads lead here. Jet streams too.
Buses are the way to go in Bulgaria! You can fly into the capital city of Sofia, spend a few days checking out that vibrant city (it’s fantastic), and then hop a bus (there’s one almost every hour) and be in Plovdiv in less than two hours. And, it will only set you back about $10.

From Plovdiv,  there are frequent bus transfers to various cities on the Black Sea, including Burgas and Varna (our coastal pick is the laid back town of Lozenets, a 4-hour bus direct from Plovdiv.) Daily buses also run to Istanbul, (6 hours).

Be warned: as of writing, many roads we encountered traveling around the country are in bad shape. Think: pothole city. So, while renting a car may seem tempting for the freedom to ride, when you shake out hassles from terrain and directional challenges to gas and parking costs, the bus smells sweeter and sweeter (well, not literally).

Next month, Ryan Air adds additional routes and flights to Sofia, creating a hub in the region. This means more cheap flights are on the horizon. (We have taken full advantage of this development by booking $20 (yes, that’s one zero,) flights from Sofia to the UK, in the name of research, of course.

Kapana is kool.
Without question Plovdiv’s hippest neighborhood, Kapana – which means “The Trap,” due to it’s maze-like layout – straddles Old Town and the pedestrian zone. Sipping a latte at a sidewalk cafe, watching a scene unfold at next door’s craft brew pub, cool and stylish 20-somethings hanging on the patio, it’s easy to wander, “Where am I?”

Adding to the texture are color-blazing murals that line most buildings of the tight streets. For 500 years during the Ottoman Empire, this was the city center and craftsman’s neighborhood. Workshops inhabited street level, residents above. During communist times, the buildings were nationalist and the chain of ownership broken. Now that’s changing and initiatives to bring back the work/live atmosphere are underway. It’s a great time to see the neighborhood in blossom.

Be sure to have dinner at local favorite Pavaj, for traditional Bulgarian eats with a fresh twist. But remember, most signs are in Cyrillic. So, Pavaj is seen as Паваж.

It’s where the streets have no name, or pavement.
The good and the bad, every place has it. And, timing is everything.

Excitement surrounding 2019 Capital of Culture festivities means the city is more chaotic than usual – you know, the way any of us are in preparation for hosting guests.  When we visited earlier this month it seemed like every single street had been ripped up and construction was in progress, creating chaos for drivers and walkers. Thankfully there are plenty of green spaces and public parks to regroup and find quiet, but just know that for the short run…construction is the name of the “capital of culture” game.

If it becomes to much, hop on the tranquil walking rail running along the river and head west to the sports complex at Loven Park. A peaceful lake surrounded by outdoor cafes offers a breath of fresh air for locals and visitors alike.

Drink like a Thracian.
Bulgaria’s fertile Thracian Valley is one of the world’s oldest grape cultivating regions. Exploring the area’s rich wine-making traditions is easy with Plovdiv as a base.

Two city enotecas, Vinoculture and Vinopolis, offer tastings along with a friendly and knowledgeable introduction to the distinctive range of Bulgarian wines including the deep and moody Mavrud and light, airy Dimyat.

Get out into the vineyards and tasting rooms surrounding Plovdiv and beyond with Zina and Vasil from Bulgarian Wine Tours. The duo has an infectious passion for Bulgarian wines along with connections in the country’s most interesting wineries.

When you need a break from wine – as if that would really happen – still, you must try another local speciality while sampling…

Deals abound.
Modern Plovdiv boosts a nice mix of born and raised locals, young students from around the country, national and international tourists, and business travelers. And the city caters to all levels and tastes. It’s a gold mine for budget travelers looking to explore a city and support art and innovation, while not spending a fortune.

You can have dinner plus wine in a good restaurant, like Pavaj mentioned above, for $15. Or, go alfresco on a park bench with a Zagroka beer for $.50, perfectly paired with a gigantic doner from everyone’s favorite kebab stand, Alex’s, for just under $2.

Plovdiv’s Free Walking Tour, offered daily at 11 a.m. and 6 p.m. (May to September,) 2 p.m. (October – April,) is the best deal in town. And, as the name implies, it’s totally FREE. (Tips for the knowledgeable guides are appreciated.)

And, of course, people watching is free and there’s no better spot than near the fountain at Tsar Simeon Garden. Life rolls by in a color wave of laughter and sunlight.

It’s a happy time in Plovdiv. You will like this place.

Nighttime strolling, Lucca style. 🌙
How i ♥️ this shot and this man (who’s sporting his grandfather Bob’s tuxedo shirt, circa early 1970s. #classicstyle ) 😂
Time to shake the plaster and renovation dust out of our hair! 😂 Castle attire, I could get used to this scene! #glincastle #weddinginireland🍀
Into the green, Ireland style. #hiking #cycling #ireland #glincastle
A hearty good moo-rning to you from the cows of Glin Castle! 🙌 😂 We’re all enjoying breakfast together. #breakfastinbed . #riverviews #glincastle #ireland
Just strolling around the castle grounds as you do when in #ireland ☘️ The home and heart of the FitzGerald family for over 700 years, today @glin_castle welcomes guests for special events and weddings. And, it’s absolutely gorgeous and luxurious here, inside and out. More pics coming. For now, we’re getting lost in the greens and blues. #grateful 🙏
I couldn’t have dreamed up this place. Here’s this morning’s run along the cliffs. #sweetsurprise
I always remember this piece of advice that one of my favorite travel editors gave me years ago. Someone out there will read what you write, then book a flight. “Take that responsibility seriously,” he said. And, I’ve always tried. In that spirit, here’s a shout out to @fergalmccarthy writing for @irishtimesnews ☘️ When deciding where we would go in Ireland before arriving to our friends’ wedding at @glin_castle this week, we received loads of good suggestions, but none seemed the right fit in this particular moment. Then, I read this story about the writer’s favorite place and that was it. We were Ballybunion bound.